"Originally deployed in midfield or at full-back, Toure was moved to centre-back for the 2003-04 season and helped Arsenal go the entire league season unbeaten as they swept to the title, adding to the FA Cup they'd lifted the previous season.

He added a second FA Cup medal in 2005, while a year later he was part of the Arsenal side that reached the Champions League final against Barcelona having scored the only goal of the two-legged semi-final with Villarreal.

After more than 200 appearances for the Londoners, Toure was firmly established as one of the finest centre-backs in the league - and Manchester City duly swooped to sign him in the summer of 2009 and immediately appointed him club captain.

During his four years at Eastlands, he lifted another Premier League title and FA Cup in over 100 appearances for City.

On the international stage, Toure has represented the Ivory Coast at two African Cup of Nations tournaments and two World Cup finals. He has more than" 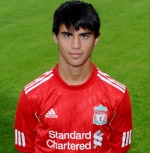 Välkommen må du täcka många skott med din gigantiska bak.
_________________
Friendship is like peeing on yourself: everyone can see it, but only you get the warm feeling that it brings.